Homo Digitalis, Reporters United and The Press Project denounce the Greek Police for 64 breaches of legislation on the use of portable cameras

Home / Η δραστηριότητά μας / Actions / Homo Digitalis, Reporters United and The Press Project denounce the Greek Police for 64 breaches of legislation on the use of portable cameras 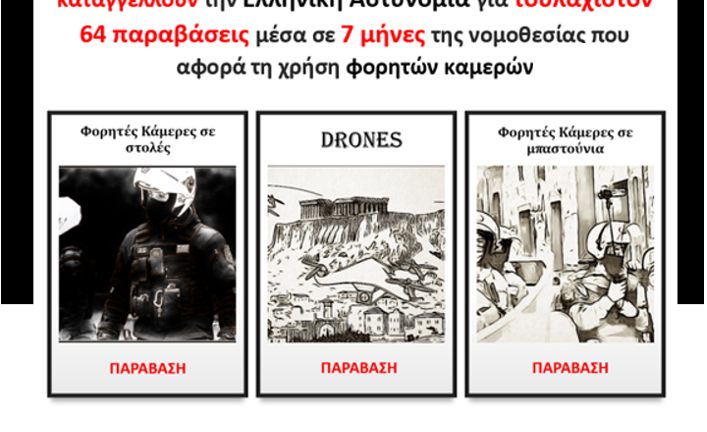 Homo Digitalis, Reporters United and The Press Project denounce the Greek Police for 64 breaches of legislation on the use of portable cameras

Today, a petition was filed before the President of the Hellenic Data Protection Authority (Hellenic Data Protection Authority), Mr. Menoudakos, by Homo Digitalis, Reporters United and The Press Project (No. Prot. G/EIS/3129/12-05-2021), in which at least sixty-four (64) violations of the provisions of the legislation concerning the use of portable cameras in public places are complained of by the Hellenic Police (Hellenic Police). At the same time, the organizations are requesting that the HACCP exercise its investigative, corrective and advisory powers on this important issue.

In particular, in accordance with the provisions of Article 12 para. 2 of Decree 75/2020, the Hellenic Police, as the controller, must each time before the operation of a surveillance system in a public place, issue and notify the decision to operate this system at least on its website, specifying obligatorily: a) the time of activation, b) the duration of its operation, c) the range of its operation, d) its specific characteristics, and e) the justification of the feasibility of its use.

However, the Hellenic Police has not complied with the obligation to publish on its website the decisions to operate the surveillance systems it uses in public places. On the contrary, in breach of its statutory obligations, the Hellenic Police Service has consistently confined itself to publishing a simple notice on its website, which indicates only the number of each operating decision, the duration of operation of the surveillance systems and their place of operation in a general and vague manner.

In other words, that notice does not communicate the content of the operating decision and does not make any reference to the important information required by Article 12(1)(b). 2 of Decree 75/2020, namely the scope of operation of the surveillance system, its specific characteristics and the justification for its use. This last element is particularly important in the context of the principle of lawfulness of processing, as Article 5 of Decree 75/2020 requires that there are sufficient indications that specific criminal offences are being or will be committed in the public place in question and that there is a reasonable belief that there is a serious risk to public security.

Moreover, the EL.AΣ. denies access to these operating decisions even after filing requests for access to documents that citizens and members of the organizations Homo Digitalis, Reporters United and The Press Project had brought before it in December 2020. Therefore, it is obvious that the EL.AΣ. manages these operating decisions as confidential documents that it does not publish and to which it does not allow access, in violation of the provisions of Article 12 para. 2 of Presidential Decree 75/2020.

We consider these practices to be illegal and undermine the protection of personal data and the relevant safeguards provided for in the Legislative Decree 75/2020 within just a few months of its entry into force (September 2020). We therefore denounce the violations before the DPA, and request the latter to fully exercise its investigative, corrective and advisory powers.

The full text of our petition is available here.

Read more on the websites of Reporters United and The Press Project!

If you want to learn more regarding the use of intrusive technologies such as drones, cameras and facial recognition technologies in public spaces you can visit the European Citizens’ Initiative’s #ReclaimYourFace page and sign our campaign! Say a resounding yes to protect public space from intrusive biometric surveillance technologies!