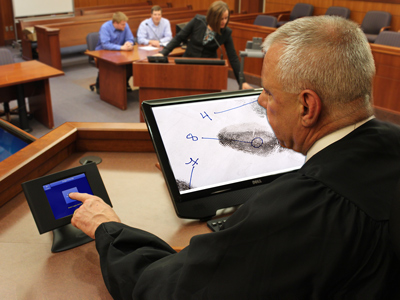 A philosophical approach by Philippos Kourakis*

There are various ways in which technology could change the way people who are involved in the legislative process and law enforcement work. In this text we will focus on the question of machines taking over the judiciary, and if that could be in line with Ronald Dworkin’s right solution thesis.

Lawyers Casey and Niblett [1] describe a hypothetical future situation in which the information and predictions we can derive from technology will be of such precision where we can assign the judge’s role to machines. The process, as they say, will be the following: in some US states, an algorithm is already being used by judges to predict the possibility that the accused will not appear before the court. Although this algorithm has not replaced the judges, it is reasonable to assume that the more effective it will be, the more the judges will rely on it, until they ultimately depend entirely on it.

Τhere is a question through this (hypothetical) scenario on how such a move would be in harmony with the very nature of law. To give an answer, we will turn to Dworkin’s work and in particular to his theory regarding the right solution thesis.

The theory of the right solution and its possible misinterpretation

Dworkin in his early career has shaken the philosophical and rigorous currents of his time, arguing that always, even in the most controversial and difficult cases, there is a right solution [2]. At first, this position seems to be largely expressed by those who support the replacement of judges by machines if the right solution seems reasonable to emerge from a mechanistic process of the highest precision. However, this approach is a misinterpretation of Dworkin’s position.

Dworkin himself had predicted such a misinterpretation. In the Empire of the Law (1986), he wrote [3]:

“I have never designed an algorithm to be used in the courtroom. No computer wizard could draw from my arguments a program which, after gathering all the facts of the case and all the texts of previous laws and judgments, would give us a verdict that would find everyone in agreement.”

Dworkin’s statement stems from his belief that the correct method of hearing cases is an exercise that is fundamentally interpretative and worthwhile and, as such, is based on principles. The judge can find the right solution in each case, but only by finding the best possible interpretation.

The best interpretation is expressed by those who, according to the letter of the law, can legitimately justify the coercion imposed by the law on its companions. In this process, Dworkin argues that the judge tries to preserve the integrity of the law by interpreting it in its best light, having in mind that the law is the creation of a community in which the unifying element is the attempt to justify state coercion.

Dworkin believed that each case had a right solution, but nevertheless, every case is difficult, and finding a solution is a very important exercise of political ethics. Therefore, despite the formalist texture of the philosopher’s belief in a correct solution to each case, he realized that the legal system, being an organic unit, is constantly changing with its individual elements being as constant as possible between them.

The question that arises from the above is whether the pace of technology development and the path it has taken will lead to machines effectively replacing judges, finding the right answer even in difficult cases. Machine Learning can indeed redirect a set of rules so that a more general goal can be served, which is something that may well be ethically welcomed. From this perspective, Machine Learning is dynamic and structured with continuity. Therefore, if it was used to deal with real assumptions, it would do so with some kind of integrity that would be mechanical in its nature.

Nonetheless, the desired goals would remain intact. The static nature of political ethics, on which the legal system would be based, would detract from legality, in Dworkin’s view. For the philosopher, integrity has the meaning that all parts of the legal system can be revised, since the argumentative disagreement reaches the foundations of legality by looking at basic questions such as how citizens should be taxed and whether they should be taxed or if there should be policies of positive discrimination [4]. Following this reasoning, legislative policies are based on principles that arise through the interpretation of difficult cases. This process aims to consolidate past decisions in a way that would justify state coercion on the part of the interpretive community.

To sum up, it is understandable that the prospect of technology through Machine Learning could hardly be in harmony with legality as expressed by Dworkin. Machine Learning does not work on principles. It operates on statistical relationships that do not reflect ethical principles. Its operation would therefore be abolished to the extent that a system (the legal) would require it to act fundamentally morally.