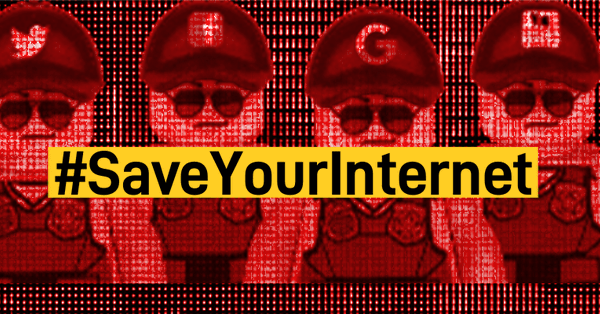 Next week is very important for the future of the internet; particularly for freedom of expression and information and the protection of privacy.

On Tuesday 26th of March, the European Parliament will vote on the proposed European Directive on Copyright. In the past we have hosted on our website detailed articles on this specific legislative reformation.

This proposed Directive introduces certain provisions which have a positive nature. However, some other of its provisions raise significant problems; the most important is Article 13, which, during the vote will constitute Article 17, as the text has been renumbered.

Article 13 is supposed to be set up to improve the existing situation and help the creators enjoy intellectual property rights on their works. However, it fails to achieve its scope and mostly assists the interests of major record, publishing and film companies and the interests of companies, which develop software for content control (content-control / filtering software).

Article 13 also does not eliminate, in any case, the serious pathogenesis of the existing regime. Specifically, it lacks a specific provision for combating false claims related to intellectual property rights, while its general, badly written and unclear provisions would lead to a slew of preliminary rulings to the Court of Justice of the European Union.

Article 13 causes new problems and is unable to ensure a reasonable balance between, on the one hand, the right to the protection of intellectual property and on the other hand the rights to freedom of expression, information and respect of personal privacy. Each type of material, which users of the internet upload on platforms of content exchange, as photos, texts, personal messages, videos, etc. will be subject to control and will not be published to the effect that the filtering software deems that there is an infringement.

Numerous experts have been sounding the alarm about the consequences of Article 13 and the uploading filters for Freedom of Expression and Information on the Internet and its diversity:

– The United Nations Special Rapporteur on Freedom of Expression and Information, David Kaye, has substantially expressed his contradiction to Article 13.

– The Federal Commissioner for Personal Data Protection of Germany, Ulrich Kelber, has clearly stressed that Article 13 leads to a tremendous growth of giants of online services and creates challenges for the protection of privacy on the Internet.

– The Minister for Justice and Citizen’s Protection of Germany, Katerina Barley, has invited German Members of the European Parliament to vote down Article 13.

– 169 specialised and prominent academics in the field of intellectual property, have underlined that the provisions of Article 13 are misleading.

Furthermore, the number of Members of the European Parliament committing to vote down article 13 in the vote of Tuesday is constantly rising!

Finally, many people are expressing their dissatisfaction with Article 13 and its very serious effects. More than 100,000 people have participated in the demonstrations that took place in many European countries on Saturday 23 March.

Call your representatives in the few days left!

Ask them to vote down Article 13!