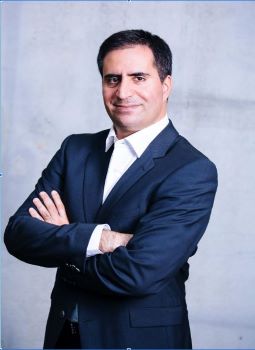 In other words, Mr Ilias Chantzos is the person responsible for the intergovernmental relations of Symantec for almost every state of the globe (apart from America), regarding Cybersecurity and data protection issues. Symantec, is one of the leading companies of Cyber Security software worldwide, with hundreds of millions users.

After all, who is not familiar with ‘Norton Internet Security’, Symantec’s most popular and No 1 product for customer protection?

Our first contact was at Data Privacy & Protection Conference where he vividly presented the topic of security breaches and the notification of such breaches. We kindly asked him to share his views on the contemporary developments on the sector as well as the role of NGOs. Despite his busy schedule, he ardently accepted our invitation. We thank him thus, for this extremely interesting interview.

In Greece, entire generations have been brought up in the framework of ‘Rightsism’ and ‘politically correctness’ Τhe crisis we experience is both economical as well as moral.

– HD:The implementation of GDPR and NIS renders Europe as a pioneer in the creation of an integrated, prescriptive setting for Cybersecurity and data protection. What are the next steps?

IC: Initially, the first step is the full implementation of GDPR. And this will become viable through the adaptation of individual rules, such as the guidelines set by the European Data Protection Board (EBPB), the imposition of fines functioning as impediments to the non abidant organisations and through solving issues arising from data transmission, especially to America. The latter acting as a sticking point to mutual interests of great, private companies.Then, adequacy decision with other countries, such as Korea will follow, which will eventually create a great secure flow space and, of course, the final decisions regarding e-privacy Regulation.

-HD: On that occasion, let me ask you about the efforts and the enormous funds that are allegedly spent within lobbying settings from giants in the technology sector such as Google and Apple on favorable e-privacy conformation towards them.

ΙC: Well, isn’t it reasonable for the companies to be interested about rules that concern and directly regulate them? The industry’s interests are not common, rather than different and dissenter. If, for example, a regulatory context  is favorable for company X, the same context will be less favorable for company Y which operates in a similar but not the same sector. The same happens with e-privacy.

Companies are ‘fighting’ each other because their interests are not common. Ιn Greece there is neither the conscience nor the full picture of the entrepreneurship interest due to the demonising of profit and entrepreneurship that emerges from the past’s ideological stiffness. We should not face the industry as a caricature of a bad capitalist, but realistically through the prism of complicated relations and existing interests. Τhis is the only way that bodies will perform correctly. Let’s give an example that everyone in Greece will easily understand. The legislature regarding dual tanks in sea-going tankers is supposed to protect the environment from oil leaks. This type of legislature is supported by environmental NGOs and shipyards (an industry that mostly pollutes. . . Can you spot the paradox already?) because it can be translated into brand new orders. Ιt will be supported by the coastal states of European Union but it is not useful to Greece (which has the greatest coastline and tremendous tourism), which has mostly sea-going shipping since it augments its costs while having zero income from its shipping.

Can you spot how many contradictions there are in one simple example and we haven’t even discussed about local communities that have suffered sea contamination and the tourism industry.

-HD: You mentioned fine imposition earlier. Recently, we watched huge companies such as Google, British Airways and Marriott being imposed tremendous fines leaving everyone believing that no one is immune within the Cybersecurity and protection of privacy sector. Thus, if the ultimate protection and secure processing of personal data is impossible, then what is at stake here? Why all this is happening?

-HD: In Greece, why do you believe that fines are not equally high?

IC:There are many factors implicated.Up to date greek companies invested in highly essentials. In state of economic crisis you do what is necessary to ensure smooth operation. Current fines are calling for the national companies which want to sell products and services abroad to answer a critical question that every foreign client will ask: “ Can you protect my personal data effectively? ”. Ι understand that small and medium sized enterprises comprehend security mainly as a cost. It is like car insurance which you may never use.

Nevertheless, security can become a competitive advantage. Even if we are kind of left behind, middle sized enterprise should keep up and improve its products and services quality. Quality will make you competitive. I understand that this quality might increase your cost but you belong in the European Union. You have to play according to these rules!

-HD: How do you perceive the NGOs role in this sector? What would you advise an organisation such as Homo Digitalis in order to make their action more effective?

Do not act as ‘rightsists’. In Greece, entire generations have been brought up in the framework of ‘Rightsism’ and ‘politically correctness’ Τhe crisis we experience is both economical as well as moral.This, of course, does not mean we have to stop fighting for our rights. We ought though, with every enquiry that we make to be well informed of its losses and its gains.Which are the consequences of our choices. Not blindly ask just because we can.

It’s the so called ‘occassional cost’. Namely, you should be informed as far as possible which are the other options, that you rejected, before the finally chosen. It is not possible, for example, based on the current business model, to ask for free internet without accepting advertisements (it should be noted that I do not like them).

You don’t like advertisements? No problem, can you afford to pay for the service you receive or to ensure the share of privacy you want? Ιt’s not enough to ask. You also have obligations. Unfortunately, we are victims of the trend “I need X at all costs”, without having thought what we lose or what we accept. It is indicator of maturity and resistance to populism to be able to distinguish easy rightsism from the one that is really in our interest. This is the biggest challenge in my opinion for all NGOs.