Homo Digitalis and Sarantaporo.gr, the most active wireless communicty network of citizens in Greece, proudly announce their collaboration.

Their common activity shall be directed to the promotion and protection of digital rights, particularly the right to access to internet, in remote areas. 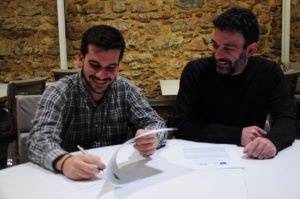 Stefanos Vitoratos and Vassilis Chryssos signing the Memorandum of Understanding for Homo Digitalis and Sarantaporo.gr

According to a recent survey, only 78,5% of Greeks have access to the internet, thus meaning that 2,5 million citizens live digitally excluded.

This partially comes as a result of the fact that the level of internet service is low, in remote areas with small population; these areas remain excluded because there is no interest by the internet service providers to invest there.

Sarantaporo.gr is a wireless community network working towards the elimination of this digital exclusion. It operates in 11 villages in the area of the Elassona Municipality, providing internet access to 3,500 people. Its operation is based on the participation of the internet users in the creation and maintenance of the network.

The two prominent civil society organizations decided to work together to propose measures to the Greek State, which shall enhance the level of internet access and provide for actual enjoyment of digital rights for the people residing in the Greek territory. 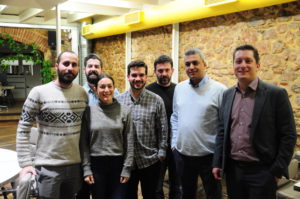